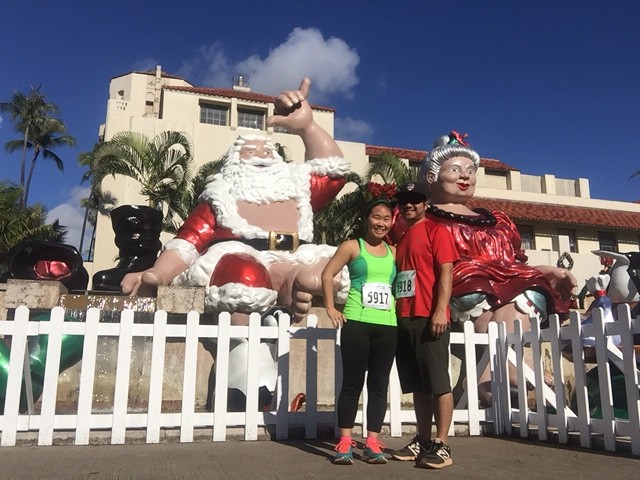 Gearing up the race!

I’ve always wanted to participate in the Jingle Rock Run benefiting the Make A Wish Foundation and this year I made it one of my goals, “do at least 3 charitable things in 2017!”

Even though we had to check out of our staycation at Aulani a few hours earlier than we had planned, we made it happen!

Being that this was our first time partaking in the Jingle Rock Run, we didn’t know what to expect. Since we were unable to pick up our packet the Friday and Saturday before the event, we figured we should get to the race early. We got there just before 3 and the race didn’t start til 6. Turns out, we could’ve came right before the race started haha.

That’s okay though, we got to win some freebies from the event sponsors (like the Santa hat the Mr is wearing), eat some delish Carne Asada Fries (which probably wasn’t the healthiest choice before a race), as well as explore around the area! Finally, 6pm hit and the race was about to begin. As we passed the start line, they were throwing out freebies and the Mr caught a bright green tutu! I put it on and as we were jogging through downtown, I was complimented by a kind belligerent woman, “baby, your tutu is da sh*t!” Hahaha. I’ll take it! Mahalo for the free tutu!

The best part about the race, besides making wishes come true for kids in Hawaii, is seeing the Honolulu City Lights, which although we can see it anytime during winter for free, we never do. This was a good opportunity for me to remind myself that I need to learn to take time to stop and appreciate the beauty of the holiday season, which usually passes me by in a stressful blur. We had a great time and I hope many wishes can come true!