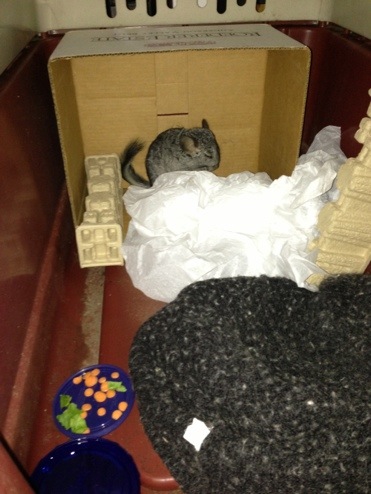 We are Chilli's adopted parents!!

Well, parents of escapee pets that is!  ;)  I don’t know if you remember the story of Gil, but he was our first adopted pet, which Matt found at his old house by the bay.  He has been with us for a good four years or so.  We enjoy him as a pet because he requires very little care, but on the downside, he’s not so cuddly and I really want a cuddly pet!

My prayers were answered last night when my good friends Annie and Kristen rescued a baby chinchilla!  They asked me to house him for now and here he is… Meet Chilli (cutest guy ever)! We are Chilli’s adopted parents!!

I’m sure he is a bit traumatized right now seeing as how they found him in the middle of the road surrounded by a bunch of cats ready to pounce!  No one in the neighborhood claimed him, so he is now our adopted animal and I hope he settles in nicely.

Don’t mind his home – we have never raised a chinchilla before, but I found a lot of useful information on Google!  Today I will get him hay, chinchilla pellets and some other small treats.

Chilli will be a happy chinchilla in the Mathy residence!  Welcome home kiddo!