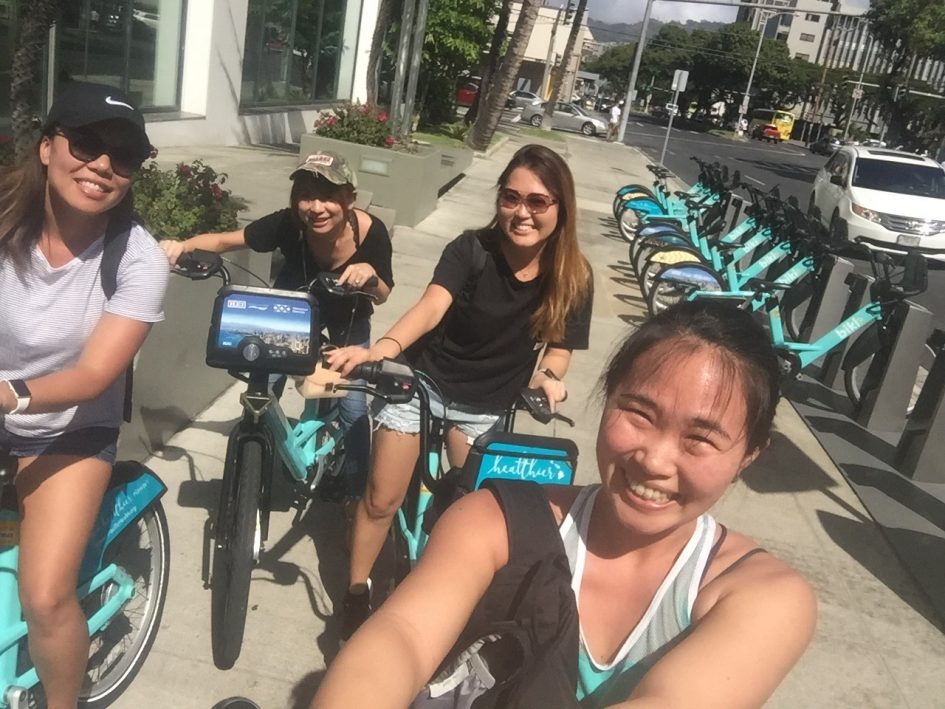 Biki is the latest craze in Hawaii. It’s a rental bike system throughout Honolulu. Even though I haven’t rode a bike in ages and none of us own a bike, Mimi had the bright idea of doing a Biki adventure with the “wifey club.” So, on a sunny Sunday afternoon in beautiful Hawaii Nei, the four of us went on a bike riding adventure.
Needless to say, the hubbos were a bit skeptical. Mine said, “do you even know how to ride a bike?!” Another one said, “be careful, we’re going on a trip soon.” They had little faith in our abilities to ride a bike haha. But, to be honest, we were worried ourselves! Before any adventure, you need fuel! We enjoyed a nice brunch at a new dim sum place near Ala Moana called Yum Cha. After that we were ready to Biki! We encountered a few hiccups trying to rent the bikes, but after a few phone calls to the Biki staff, we were good to go. Biking through Ala Moana Beach Park!

We decided to take the safe route and stay on a path instead of the road. We ventured through Ala Moana Beach Park and it was lovely! It did take us about an hour to go 2 miles but the good news is we survived and no one got hurt! That called for a celebration, which ended with a couple mimosas and a bit too much champagne.

What a crazy fun adventure. Hope we do it again soon, wifey club!