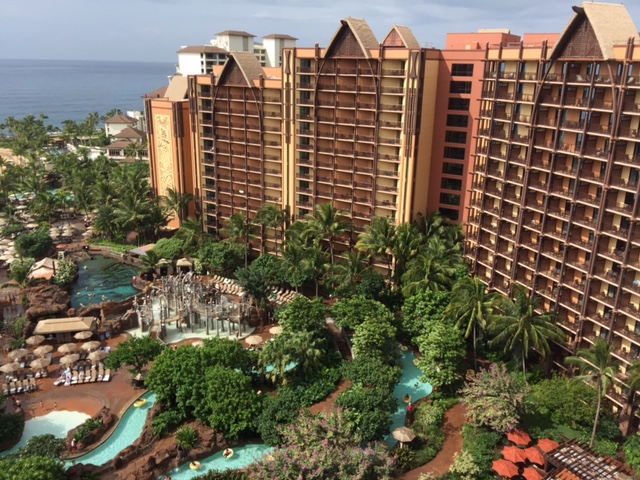 Aulani, A Disney Resort & Spa in all it's glory!

Since Aulani, A Disney Resort & Spa opened about 5 years ago, I always dreamed of having a mini staycation there, but the price was so expensive, even with Kama’aina discount.  Everyone who went there though said it was worth the price.  I was waiting for a special opportunity to splurge on a weekend retreat and it just so happened that opportunity presented itself to us last year! Our friends were getting married there in September and they had special “block room rates,” which was even cheaper than the Kama’aina discount!  Now was our chance!  We stayed there for 2 nights and 3 days and it was AH-Mazing, just as everyone said.  It seriously feels like you’re not on Oahu anymore.  The slides and lazy river pool are fun and exciting, but what I really enjoyed the most was just lounging at the beach and napping on the reclining lawn chairs!  Not to mention, they have jacuzzi tubs and the robes – don’t even get me started on the robes.  They were so silky soft and comfortable!  I wish I could steal one!  And don’t forget about the Dole Whip!  It’s a must. That weekend came to a close too quickly! But, luck would have it one of our best friends recently started working at Aulani and she wanted to have her birthday party there in December so we got to spend another weekend lounging by the pool ALL.DAY.LONG!  Lucky it’s Hawaii so the weather is perfect year round!  That was a fun and memorable weekend with great friends for the special birthday girl! I just realized, the last quarter of 2016 was centered around everything Disney!  Aulani in September, Disneyland from end of October to early November (I still need to post about this wonderful trip celebrating the marriage of the KM duo), and then Aulani again in December!  What a way to end 2016 huh!

I am truly blessed with great friends and opportunities!

I hope to visit Aulani again with my family and nephews!  Those two munchkins would have a blast!  I think Dad would enjoy himself too, even though he hates the water haha!  Time with family is priceless. We bid adieu! Until we meet again, Aulani!